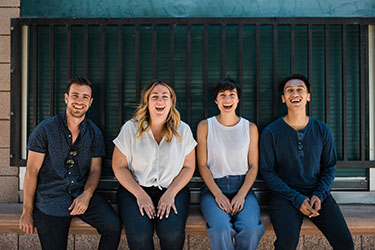 11 Oct World Premiere of Beyond Babel – 10 Weeks Only

WOW are we honored to be selected to do the PR for the World Premiere for this amazing new dance production by Keone & Mari Madrid and Hideway Circus. These four are an incredible force in the dance world productions. For San Diego to play host to this amazing show is fantastic. This is a show like none you have seen before with it fully being an immersive show including moving seats. BTW, if you haven’t seen Keone & Mari, please do yourself a favor and look them up online as you will be blown away at their dance style. They have been on everything from World of Dance to doing the choreography and staring in a few Justin Bieber videos. It is only here for a short time so hurry to get your tickets.

A new immersive dance show created by Keone & Mari Madrid and Hideaway Circus has come to San Diego for a limited run titled BEYOND BABEL. Starring Keone and Mari in the lead roles, the production is inspired by the classic tale of Romeo & Juliet and current social stories from all over the world. BEYOND BABEL is told entirely through the style of West Coast Urban Dance in a new immersive theater space, called the Beyond Babel Theater (2625 Imperial Avenue, San Diego CA 92102), near Downtown San Diego.

BEYOND BABEL is about the division of families, friends, and a community of people as authorities decide to build a wall between them. We follow two divinely linked lovers as they reconcile with the rising tensions of a populace cut in half. The show is set to a contemporary soundtrack and features a cast of twelve elite dancers.

Keone and Mari Madrid, San Diego residents, are the co-creators and stars of BEYOND BABEL. They are dancers and choreographers, teachers and creatives, and husband and wife, individually starting out on their own paths and eventually finding each other through dance. Notable work includes: starring in and choreographing for Justin Bieber’s “Love Yourself” music video, a New York Times Square Billboard, “The Ellen Show,”“So You Think You Can Dance,” Mark Ronson, Flying Lotus & Kendrick Lamar, SKY: A 3D Musical, “Dancing With the Stars,” nominations for best choreography at the MTV Video Music Awards and the UK Video Music Awards, Kpop artists, viral videos, multiple champions at major dance competitions, global dance instructors and more. Their Youtube videos have been viewed over 2 billion times. Last summer they starred on the hit NBC show “World of Dance.” Most recently, Keone and Mari have published “Ruth” the first ever dance book, a multi-media experience combining dance, writing, illustration, music and video.

“Current social issues and conversations are a huge motivation to this story,” said Keone Madrid. “In the times that we’re in with social media, instant gratification and more, we noticed that people are starting to put more value and interest into experiences. Providing an unforgettable experience is such an important aspect to this project.”

“It’s been a long time dream of ours to create a full length dance show,” said Mari Madrid. “It’s a bit surreal that we’re finally in a place to be making that a reality.  We’re also so excited to be collaborating again with Hideaway Circus to make this a new, fresh, and unique show experience.”

Josh Aviner and Lyndsay Magid Aviner are the Brooklyn the based production company Hideaway Circus. They are the other co-creators behind BEYOND BABEL, and it will be their second collaboration with Keone and Mari Madrid. Their previous live show together was a genre-defying slasher circus show titled SLUMBER, and described by Time Out NY as “contemporary, sexy and a little bit dangerous.” The production played for multiple seasons in New York and Australia. In February of 2018, they released the first ever circus and dance show designed specifically for viewing in virtual reality. Their other live productions the The Miss Behave Gameshow is now playing at Bally’s Casino in Las Vegas. Josh and Lyndsay also the host award-nominated Hideaway Podcast, a podcast where they discuss current circus and theatre news and interview artists and entrepreneurs in the industry.

“Lyndsay and I are thrilled to be collaborating with Keone and Mari again,” said Josh Aviner. “Their style of West Coast Urban dance hasn’t been presented in a live format like this before, and it’s a very exciting opportunity to develop material and scenes with this unusual and immersive seating layout.”

“I feel like the chance to see these dancers up-close, and not on a screen, combined with art installations by London is truly a once in a lifetime opportunity,” said Lyndsay Magid Aviner.